Alan Gilbert launched his tenure as the new Chief Conductor of Hamburg’s NDR Elbphilharmonie Orchestra in September 2019. The Grammy Award-winning conductor previously served for more than a decade as Principal Guest Conductor of the ensemble when it was known as NDR Symphony Orchestra Hamburg; it has since adopted the name of the Elbphilharmonie, its already-iconic new home. Gilbert’s new position follows on the heels of his truly transformative eight-year tenure as Music Director of the New York Philharmonic, where he was the first native New Yorker to hold the post, making “an indelible mark on the orchestra’s history and that of the city itself” (New Yorker), “building a legacy that matters and … helping to change the template for what an American orchestra can be” (New York Times). Gilbert is also Conductor Laureate of the Royal Stockholm Philharmonic, where he was Music Director for eight years; Principal Guest Conductor of Japan’s Tokyo Metropolitan Symphony; and Music Director Designate of the Royal Swedish Opera, where he looks forward to inaugurating his tenure next spring.

Highlights of Gilbert’s first season as Chief Conductor of the NDR Elbphilharmonie Orchestra included a four-week inauguration festival titled SOUNDSlikeGILBERT (KLINGTnachGILBERT), world premieres of new commissions from Enno Poppe and Composer-in-Residence Unsuk Chin, ambitious repertoire ranging from Verdi’s Requiem and Magnus Lindberg’s Kraft to My Fair Lady, and symphonies by Haydn, Beethoven, Brahms, Bruckner and Bernstein. Beyond Hamburg, he returned to the podiums of the Leipzig Gewandhaus Orchestra, Staatskapelle Dresden, Royal Stockholm Philharmonic, Tokyo Metropolitan Symphony and Cleveland Orchestra, where he made his sole U.S. appearances of the season. During the COVID-19 lockdown, he led livestreamed concerts with the Swedish Radio Symphony and Royal Stockholm Philharmonic; hosted a popular series of Facebook Live chats with Marin Alsop, Herbert Blomstedt, Sir Simon Rattle and other of his fellow conductors; and was featured in “Mahler’s New York: A Digital Festival,” a streaming event by the New York Philharmonic. The 2019-20 season also saw the release of Bruckner’s Seventh Symphony, which Gilbert recorded with the NDR Elbphilharmonie Orchestra for Sony Classical, and both volumes of the complete Beethoven piano concerto cycle he recorded with Inon Barnatan and London’s Academy of St Martin in the Fields.

With programs featuring ten symphonies and three operas in ten countries across three continents, the conductor’s 2018-19 season showcased something of the extraordinary breadth of his range. With the NDR Elbphilharmonie Orchestra, he led concerts and a semi-staged production of Ligeti’s Le Grand Macabre, and embarked on an extensive Asian tour. Elsewhere, besides making his Israel Philharmonic debut with a ten-day residency, he rejoined the Royal Stockholm Philharmonic and Tokyo Metropolitan Symphony, gave his first performances in a decade with the Zurich Tonhalle and Vienna Symphony orchestras, and reunited with the Cleveland Orchestra, Berlin Philharmonic, Leipzig Gewandhaus Orchestra, Staatskapelle Dresden, Bavarian Radio Symphony, and Orchestre Philharmonique de Radio France. Beyond the concert hall, he made his Dresden Semperoper debut with a new production of Schoenberg’s Moses and Aaron and returned to La Scala for Korngold’s Die Tote Stadt.

In eight years as Music Director of the New York Philharmonic, Gilbert succeeded in transforming the orchestra, already one of the nation’s most venerable arts institutions, into a leader on the cultural landscape. He initiated the positions of Marie-Josée Kravis Composer-in-Residence, Mary and James G. Wallach Artist-in-Residence, and Artist-in-Association. Staged productions of Ligeti’s Le Grand Macabre, Janácek’s Cunning Little Vixen, Stravinsky’s Petrushka and Honegger’s Joan of Arc at the Stake were presented to critical acclaim and capacity audiences, and he oversaw the development of two series devoted to contemporary music: CONTACT!, introduced in 2009, and the NY PHIL BIENNIAL, an exploration of today’s music by a wide range of contemporary and modern composers, which was inaugurated in 2014 and returned in 2016 to a fanfare of critical approval. The eighth and final season of Gilbert’s tenure, which also marked the Philharmonic’s 175th anniversary season, both honored their shared hometown and celebrated this extraordinary legacy. “A Concert for Unity,” his final subscription performances at David Geffen Hall, featured the Philharmonic playing alongside 22 international musicians, representing orchestras in Australia, Brazil, China, Cuba, the Czech Republic, France, Germany, Iran, Iraq, Israel, Japan, Mexico, Russia, South Africa, South Korea, Sweden, Turkey, Venezuela, the United Kingdom, and the United States.

Highlights of Gilbert’s recent European guest conducting engagements saw him make his staged operatic debut at La Scala with a new production of Porgy and Bess; reunite with the Academy of St Martin in the Fields to complete their recording of Beethoven’s complete piano concertos with Inon Barnatan; and make his first appearances with the London Symphony Orchestra, where his program included works by Carl Nielsen, a composer he has consistently and ardently championed. His recording of the Danish composer’s Third Symphony, made with the New York Philharmonic for their four-album box set as part of “The Nielsen Project” on Denmark’s Dacapo label, was chosen as Gramophone’s favorite recorded version of the work.

In September 2011 Alan Gilbert became Director of Conducting and Orchestral Studies at the Juilliard School, where he was also the first holder of Juilliard’s William Schuman Chair in Musical Studies. He made his acclaimed Metropolitan Opera debut in 2008, leading a production of John Adams’s Doctor Atomic that, when released on DVD, went on to win a Grammy Award. He also conducts on Renée Fleming’s Grammy Award-winning Decca release, Poèmes, and was nominated for the 2015 and 2016 Emmy Awards for Outstanding Music Direction in PBS’s Live from Lincoln Center broadcasts of two New York Philharmonic productions: the orchestra’s celebrated staging of Sweeney Todd, and its 100th-birthday gala tribute to Frank Sinatra, which featured Christina Aguilera, Bernadette Peters, and Sting. Gilbert received Honorary Doctor of Music degrees from the Curtis Institute of Music (2010) and Westminster Choir College (2016), as well as Columbia University’s Ditson Conductor’s Award, which recognizes his “exceptional commitment to the performance of works by American composers and to contemporary music,” in 2011. Elected to the American Academy of Arts & Sciences in 2014, he has now also been named an Officier de l’Ordre des Arts et des Lettres by the French government. He gave the 2015 lecture for London’s Royal Philharmonic Society during the New York Philharmonic’s European tour, speaking on “Orchestras in the 21st Century – a new paradigm,” and received a 2015 Foreign Policy Association Medal for his commitment to cultural diplomacy.

Alan Gilbert is managed in association with IMG Artists 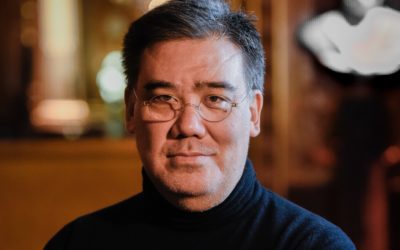 Alan Gilbert has been named Music Director of the Royal Swedish Opera, where he looks forward to launching his tenure in spring 2021. 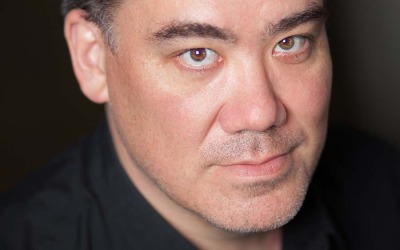 It is with much excitement that EMM is delighted to announce that ALAN GILBERT has been appointed Chief Conductor of the
NDR Elbphilharmonie Orchester starting 2019/20. 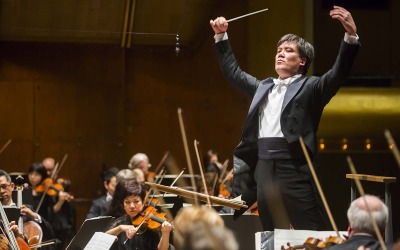 “The Gilbert era…has been the most intellectually lively in the recent history of the orchestra.” – New Yorker In seven years as Music Director of the New York Philharmonic, Alan Gilbert has continued to evolve the role of the modern orchestra; as the New York Times... 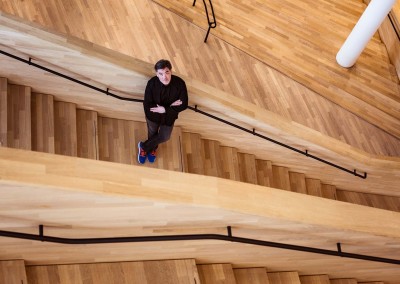 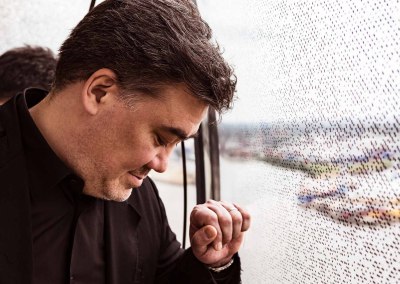 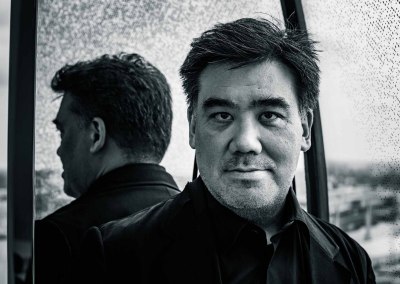 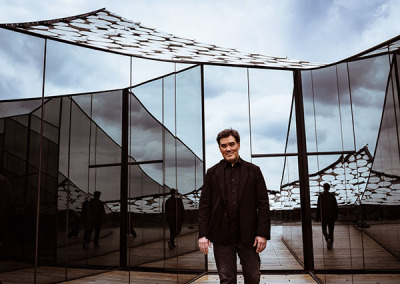 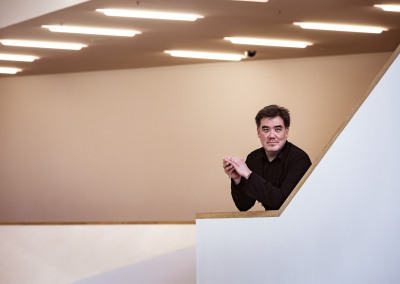 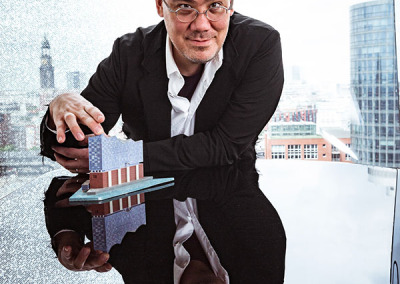