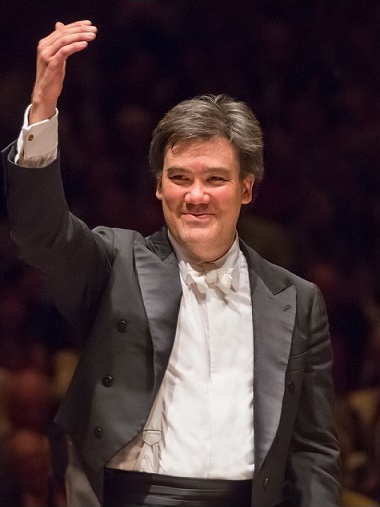 The coming season marks Alan Gilbert’s seventh as Music Director of the New York Philharmonic, where, as the New Yorker observes, he “has made an indelible mark on the orchestra’s history and that of the city itself.” Besides collaborating with Composer-in-Residence Esa-Pekka Salonen, Artist-in-Residence Eric Owens, and Artist-in-Association Inon Barnatan – incumbents of the three artistic partnerships he initiated at the Philharmonic – he looks forward to leading the orchestra in repertoire ranging from Beethoven and Tchaikovsky to multiple world, U.S., and New York premieres, several of which will take place under his curatorship during the orchestra’s second NY PHIL BIENNIAL. Recently recognized with a Foreign Policy Association Medal for his extraordinary commitment to cultural diplomacy, Gilbert also maintains a major international presence. The 2015-16 season sees him make guest conducting debuts with four eminent European ensembles – Milan’s La Scala Orchestra, the Staatskapelle Dresden, the London Symphony Orchestra, and the Academy of St. Martin in the Fields – as well as returning to the podiums of the Cleveland Orchestra, Leipzig’s Gewandhaus Orchestra, Paris’s Orchestre Philharmonique de Radio France, Tokyo’s Metropolitan Symphony, and Hamburg’s NDR Symphony, where he has served as Principal Guest Conductor for more than a decade.

“I couldn’t be more thrilled to continue my work with the New York Philharmonic, and to begin a new era for the orchestra with our new Concertmaster, Frank Huang. I’m extremely excited by the enormous range of music we will be playing this season – from favorite works by Mozart, Beethoven, Mahler, and Richard Strauss to a host of contemporary works in our second NY PHIL BIENNIAL. There really is no other orchestra in the world that can play such a wide variety of repertoire with such style and authority. I am also enormously grateful for the extraordinary enthusiasm for what we do that we constantly receive from our audiences.”

Gilbert’s forthcoming programs with the London Symphony Orchestra, Bavarian Radio Symphony, and the Cleveland Orchestra all include works by Carl Nielsen, a composer he has ardently championed throughout his career. At the New York Philharmonic he undertook “The Nielsen Project,” a multi-season initiative to perform and record the Danish composer’s complete symphonies and concertos in celebration of his 150th birthday. A Gramophone survey of best recordings of Nielsen’s Third Symphony named the Nielsen Project recording as its top choice, while the New York Times recognized the project as “one of the great successes of Alan Gilbert’s tenure thus far” (New York Times). To see Gilbert conducting Nielsen’s Third Symphony (“Sinfonia espansiva”) with the Berlin Philharmonic last November, click here.

Last season at the Philharmonic, Gilbert directed three world premieres, the U.S. premiere of Unsuk Chin’s Clarinet Concerto (a Philharmonic co-commission), and works by contemporary Nordic composers during their celebratedCONTACT! series. As Opera News recognizes, “his commitment to contemporary music will be a vital part of his legacy.” He also led the orchestra on EUROPE / SPRING 2015, their eighth international tour together, and in inaugural performance residencies in Shanghai and at Santa Barbara’s Music Academy of the West. His 2014-15 Philharmonic highlights also included a star-studded Verdi Requiem, a 15th-anniversary collaboration with Yo-Yo Ma and the Silk Road Ensemble, and – headlined by Academy Award-winner Marion Cotillard – a staging of Honegger’sJoan of Arc at the Stake that was pronounced “one of the [orchestra’s] most spectacular offerings so far” (Classical Voice America).  In his debut at the Mostly Mozart Festival this summer, he triumphed – in a production co-presented by Lincoln Center and the New York Philharmonic – leading the U.S. stage premiere of George Benjamin’s hit operaWritten on Skin. The Washington Post called it “the Cultural Event of the New York summer season,” while New Yorkmagazine reported, “The score leaves no room for sloppiness, and Alan Gilbert extracts a performance of acid-etched precision from the Mahler Chamber Orchestra.” The New York Times observed, “All the intricacy, beauty and strangeness of the music come through in the assured and colorful performance that the conductor Alan Gilbert, at his most brilliant, draws from the Mahler Chamber Orchestra.”

Beyond the Philharmonic, Gilbert launched 2014-15 with the venerable Leipzig Gewandhaus Orchestra, replacing indisposed music director Riccardo Chailly in season-opening concerts and on tour at the Lucerne Festival, Musikfest Berlin, and London’s BBC Proms. He made welcome returns to the Berlin Philharmonic, Munich Philharmonic, and NDR Symphony Hamburg, and took the podium for the Philadelphia Orchestra’s first performances of Janácek’sGlagolitic Mass. He also returned to the Metropolitan Opera to conduct Don Giovanni with Peter Mattei in the title role, and conducted Mozart’s Gran Partita and Messiaen’s otherworldly Des canyons aux étoiles at the Santa Fe Chamber Music Festival. Besides receiving a 2015 Foreign Policy Association Medal, Gilbert was nominated for an Emmy Award for Outstanding Music Direction of the New York Philharmonic’s acclaimed Sweeney Todd production, as seen on PBS’sLive From Lincoln Center. He also had the honor of giving the 2015 lecture for London’s Royal Philharmonic Society, speaking on “Orchestras in the 21st Century – a new paradigm”; an edited version of his talk appeared in the Guardian, and the full text may be downloaded here.