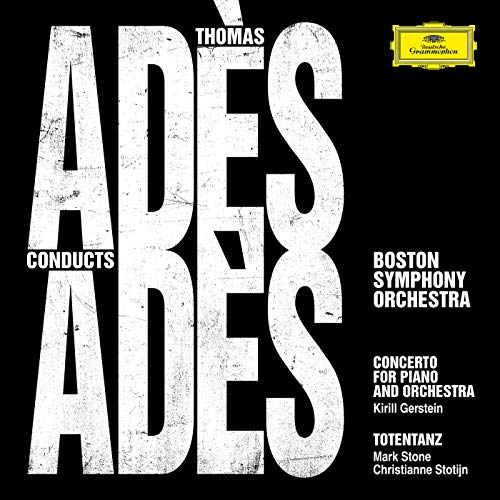 “Adès may be the most sought-after musician of our time … he has written a tonal piece that is simultaneously thoughtful and musical, rooted in the past but forward-looking, and also crowd-pleasing…”
The Wall Street Journal, reviewing Thomas Adès’s Concerto for Piano and Orchestra, 8 March 2019

Selected by The New York Times as one of the Best Classical Music Premieres of 2019 and hailed by critics worldwide, Thomas Adès’s Concerto for Piano and Orchestra entered the concert repertoire within months of its first performance last March and is fast approaching a tally of fifty performances. Both this work and the composer’s Totentanz receive their world premiere recordings in a new album from Deutsche Grammophon, set for international release on 28 February 2020.

Adès Conducts Adès celebrates the extraordinary talent of Thomas Adès, acclaimed equally as composer, pianist and conductor. The Grammy Award-winning British musician directs the Boston Symphony Orchestra and soloist Kirill Gerstein in the debut recording of his Concerto for Piano and Orchestra. Adès and the BSO are then joined by mezzo-soprano Christianne Stotijn and baritone Mark Stone in Totentanz, an all-encompassing dialogue with Death for two soloists and vast symphonic forces.

“Here is an unabashed showpiece in the grand manner, replete with thundering double octaves, frame-rattling two-hand chords, and keyboard-sweeping glissandos,” observed Alex Ross in The New Yorker about Adès’s Concerto for Piano and Orchestra. The three-movement work’s first performance, given at Boston’s Symphony Hall under the composer’s direction on 7 March 2019, was lauded by the New York Times for being “refreshingly, even radically, normal” and “an affectionate, joyous … tribute to tradition”. Its international reception has proved equally enthusiastic: The Times (London) found the work’s UK premiere last October to be a “joyous surprise”, while the Financial Times ranked it in company with the piano concertos of Rachmaninov and Prokofiev.

The Concerto for Piano and Orchestra was commissioned for Kirill Gerstein by the Boston Symphony Orchestra, of which Thomas Adès has been Artistic Partner since the 2016-17 season. The piece was inspired directly by the virtuosity and majestic musicianship of the composer’s friend and duo partner Gerstein. He proposed that Adès should consider writing a piano concerto while they were preparing performances of the latter’s In Seven Days with the BSO in 2012.

“I don’t think we have had such a piano concerto in the literature since Prokofiev and Ravel,” Gerstein noted in an interview with Gramophone. “I really think it’s a masterpiece. It’s quite concise. It does what a piano concerto should do – it has octaves, a cadenza, a slow movement of gravitas. He references the traditional models, but you never think he is doing something derivative.”