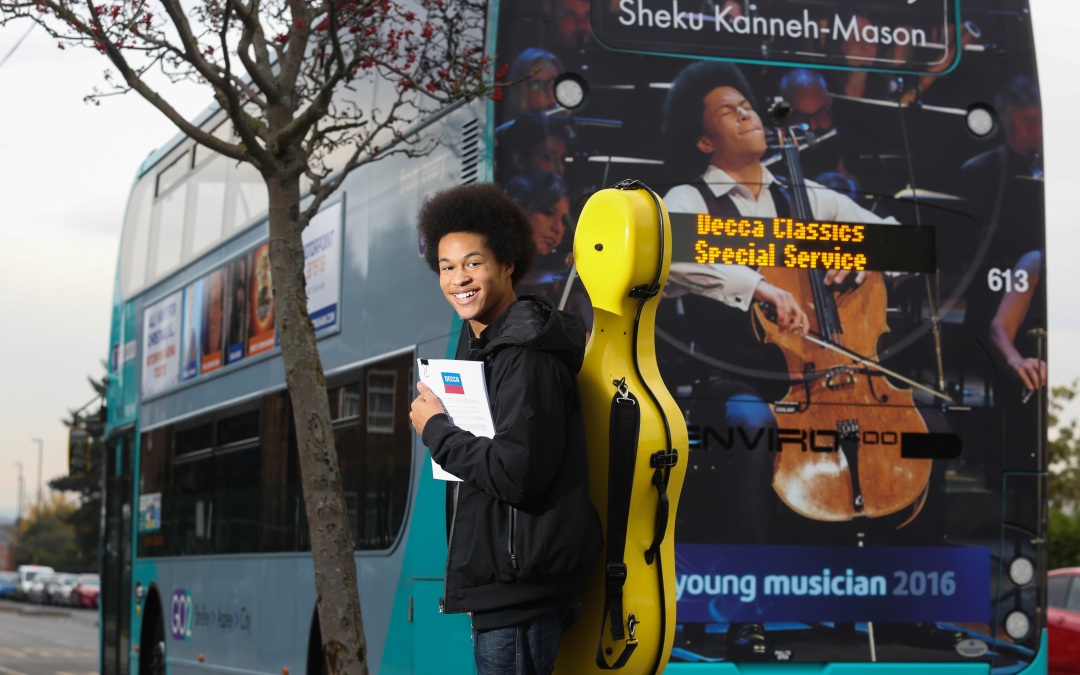 EMM is thrilled to announce that Sheku Kanneh-Mason, winner of BBC Young Musician of the Year 2016, has signed an exclusive recording deal with Decca Classics. This major new record deal will provide long-term support to the vibrant young classical star as he embarks on the next stage in his studies and help nurture his flourishing musical career.

A local hero in Nottingham, Sheku signed his record contract on board his very own bus! The City Council named it after him following his BBC Young Musician triumph and the route includes a stop for his school, Trinity Comprehensive.

To kick start Sheku’s new partnership with Decca Classics, he will record Shostakovich Cello Concerto No.1 – the piece which saw him become the first black winner of BBC Young Musician of the Year, in a performance which was described by judges as “electrifying, sincere and moving”.

Sheku is delighted to be taking his musical career to the next level:

“It is a great honour for me to be joining the Decca Classics family and following in the footsteps of great artists like Mstislav Rostropovich, my musical hero. I’m excited to take the next step on my journey and look forward to bringing my passion for classical music to a wider audience.”

“Sheku is an astonishingly gifted young musician with incredible energy and a burning passion for his music. We are thrilled to be partnering with Sheku to help foster his remarkable talent through ongoing support for his musical studies and opportunities to record with leading artists. I can’t wait to see him grow and develop in the coming years and we will be by his side every step of the way.”

“Sheku is a rare talent and it is wonderful to have the backing of a major label at such a formative moment in his development. Together with Decca, our aim is to nurture this inspiring young musician and give him the freedom to mature at his own pace as he embarks on the next chapter in his career.”

Sheku comes from an incredible musical family in which all six of his siblings (he is the third child of seven) play instruments to a phenomenally high standard – yet neither parents are musicians. Simon Cowell called them “the most talented family in the world” during a performance on TV’s Britain’s Got Talent. Every spare penny goes into the children’s musical education, from lessons, buying sheet music and instruments, to re-hairing bows and re-tuning pianos.

Every Saturday, Sheku wakes up at the crack of dawn in order to catch the train to London to attend the Royal Academy of Music’s Junior Programme. He uses the journey to catch up with his A-Level homework.  However Sheku still finds time for his other hobbies – he enjoys football, table tennis and listens to a wide range of music from Bob Marley to Mozart and Mahler.

Sheku began to play the cello at the age of six, after attending a concert in Nottingham. By the time he was nine, he had achieved Grade 8 and earned the top marks in the country. Since then he has won numerous awards, including the Royal Philharmonic Society Young Instrumentalist Prize.

Sheku regularly performs with Chineke!, Europe’s first BME (black and minority ethnic) orchestra, and has appeared as a concerto soloist with them at the Royal Festival Hall. “It was one of the highlights of my life,” he says. “I would love to inspire more diversity in young people taking up classical music – it would be a really wonderful thing if I could be a role model in that way.”

Sheku is also passionate about building better opportunities for young people of any background to learn music at school and is the Junior Ambassador for music education charity London Music Masters. “You might never want to go on to become a musician, but it’s still so important. I’d love to help bring more music to schools.”

Sheku will make his first Decca recording next year, but before then this sensational young cellist can be found playing in concerts halls around the UK and further afield – with many solo and concerto performances lined up which are sure to mesmerise and enthrall.