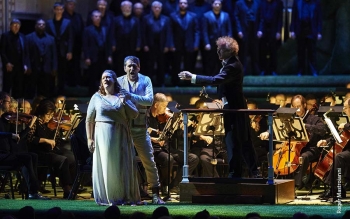 In front of an audience that included 900 League of American Orchestra attendees, Cleveland proved why it, as Zachary Lewis notes in The Plain Dealer, “dominates the orchestra arena.”

“Supported by an orchestra in peak shape and stocked with first-rate vocal talent… not only enchanted, but also made clear to out-of-towners that when it comes to thinking outside the symphonic box, the Cleveland Orchestra is fully engaged. Other concerts that weekend only reinforced the message. Unfazed by the notoriously complex Daphne, the orchestra and Welser-Möst Thursday and Friday went on to deliver several more rarities, including Dvořák’s Symphony No. 5, Messiaen’s Chronochromie andHymne, and Strauss’ own Symphonia Domestica.

Timothy Robson writes in BachTrack that, “Pride of place goes to Franz Welser-Möst and The Cleveland Orchestra. …They made it all sound easy, although it clearly was not. As in the past, Franz Welser-Möst proved to be at his most inspired in an opera he loves; Daphne can be marked as one of his finest musical achievements in Cleveland.”

The Financial Times’ George Loomis writes, “The opera’s orchestral demands made it a fine choice for the Cleveland Orchestra’s annual staged opera conducted by Franz Welser-Möst. The climax of Daphne is entrusted to the orchestra virtually alone as Daphne is transformed into a laurel tree to music of shimmering beauty, …The moment here capped a gorgeous orchestral performance notable for pristine textures as well as full bodied eruptions.”

Photo: Soprano Regine Hangler (as Daphne) and tenor Andreas Schager (as Apollo) performing in Richard Strauss’s Daphne with The Cleveland Orchestra at Severance Hall, Franz Welser-Möst conducting, in May 2015.  Photo by Roger Mastroianni.