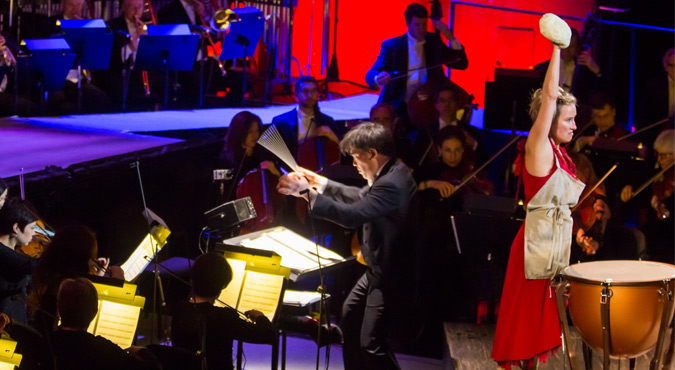 Music Director of the New York Philharmonic, Alan Gilbert has been nominated in the category of Outstanding Musical Direction in the 67th Emmy Awards. The nomination was announced on 16 July 2015 for his work as Conductor and Music Director for Stephen Sondheim’s Sweeney Todd: The Demon Barber of Fleet Street – Live At Lincoln Center.

The production, which was filmed for PBS, also received Emmy nominations in the categories of Outstanding Lead Actress In A Limited Series Or A Movie for Emma Thomson as Mrs. Lovett, and Outstanding Special Class Program.

The winners will be announced on 20 September 2015.

Reviews of the performances were unanimously full of praise:

“Under Mr. Gilbert’s direction, the performance was remarkable for the clarity it brought to Jonathan Tunick’s sumptuous but delicately textured orchestrations. The merry piping of the woodwinds representing the sound of freedom to Johanna in ‘Green Finch and Linnet Bird’; the darkly rippling strings that recur during repeated snatches of ‘The Ballad of Sweeney Todd’; the terrifying bursts of brass that punctuate the show’s more violent moments: Such details can easily be blurred, but came through incisively here.” — The New York Times

“Alan Gilbert has already shown that the Philharmonic can be the best opera company in town; now he’s put Broadway on notice, too.” — New York

“As conductor and music director of the New York Philharmonic, Alan Gilbert has one of the best, most rarefied jobs in Manhattan. And on Wednesday night, after the Philharmonic’s concert version of Stephen Sondheim’s Sweeney Todd, he proved he’s having more fun than the rest of us. …

“Looking out into the crowd, he spied Mr. Sondheim, then turning to Ms. [Emma] Thompson, he whispered in her ear: ‘I’m going to go get him; do you want to come along?’

The two beamed as they ran off the stage and up the aisle (mowing down early departers clogging the path) to Mr. Sondheim, who they embraced and whisked to the stage.” — The Wall Street Journal

“Conducted by Alan Gilbert, the orchestra sounded excellent, especially during the more chaotic moments like the second-act ‘City on Fire.’” — Playbill

“The glory that is the New York Philharmonic, playing Jonathan Tunick’s orchestration, makes you realize just how great this score is; a large chorus added to its grandeur. Bernadette Peters, Barbara Cook, and yes, Stephen Sondheim were in the audience (he was brought on stage for a curtain call). All seemed overjoyed by Gilbert’s reading and the superb work of the cast.” — ClassicsToday.com