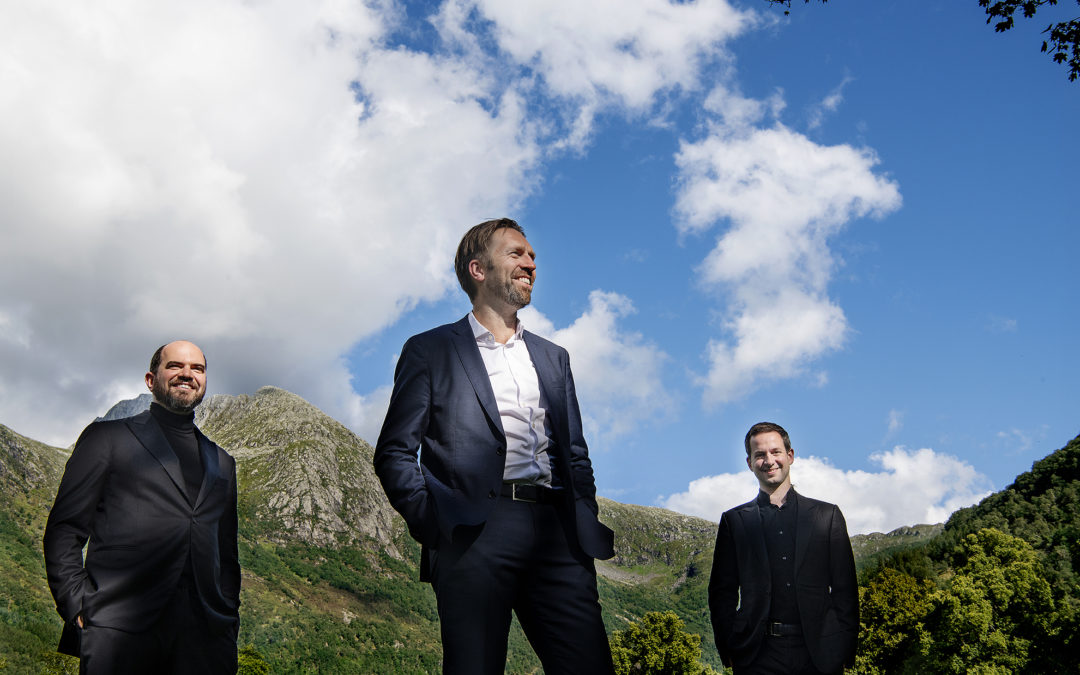 As summer ebbs we say farewell to another Rosendal Chamber Music Festival which, now in its third year, attracted artists and audiences from further and further afield, all of whom have taken home a little bit of

Here are highlights of some of the reviews:

“Pianist Leif Ove Andsnes was born not far from Bergen, in Karmøy, and two years ago, in the best Scandinavian tradition, he created his own festival in Rosendal, one of the small and innumerable paradises that populate Norway, on the shores of the Hardanger fjord and an hour and a half away from Grieg’s hometown. In 2016, his natural fondness for Schubert made him choose the festival’s first theme of 1828, the last year of the Austrian composer’s life, while Mozart was the almost exclusive protagonist of the second festival. But now he has honed his talent as a programmer in line with the commemoration of the centenary of the first Great War … It is not possible to summarize more than fifty compositions interpreted over ten concerts in just three and a half days. But it is possible to record the most important, and at the head of everything is a trio of extraordinary pianists: Bertrand Chamayou, Kirill Gerstein and, of course, Andsnes himself, the most modest of musicians and the most generous with his colleagues. From his hands emerged the best interpreted music of the festival and perhaps place of honor should be granted to the French pianist’s performance of Charles Ives’ Concord Sonata on Saturday afternoon.

“… There is no Rosendal glamour, no formal attire, nor that eagerness to see and be seen that prevails at other festivals. The majority of the concerts are held in an old and modest, converted stable where it is necessary to tread through mud to arrive at the concerts: The glamour of truth is in the extraordinary natural surrounding, one of an overwhelming beauty, with the water tumbling in thin or wide waterfalls from the summits that stand proudly above the fjord.”

“There are places that seem to allow us tap into the universe, and on that list you can introduce Rosendal. Reachable by boat from the city of Bergen, an ancient centre of the Hanseatic League, Rosendal is a village in the Nordic nature, its reflection dipped in the water of a fjord. Despite being remote, this little corner of the world boasts an innovative concert hall with its own digitized sound system, created out of a large centuries-old sheep barn. Here the famous Norwegian pianist Leif Ove Andsnes, who combines musical wisdom with a strong and commanding fantasy, has created a chamber music festival rich and precious for the quality of the performers and for the depth of the themed programmes which are warmly welcomed in the cutting-edge Great Hall as well as in the salons of the Manor House and the white church of Kvinnherad.”

“Leif Ove showed himself to be a true researcher, an inquisitive musicologist and even more – an anthropologist – in an effort to collect the music of the thundering four years of the war in which one could hear both fear and stupor, and surprise, and absurdity, and the contrasting emotions without which the human consciousness is simply incapable of existing, even in the most dead-end situations.

“… A new face arose with the American Dover String Quartet with their juicy, silky, balanced, aristocratic sound. For the second time in Rosendal the starry French pianist Bertrand Chamayou appeared at the festival, who was especially indispensable in the music of Ravel and Debussy, and the revelation was in his performance of Ives’ Concord Sonata, which struck with the harmony and strength of its performance. His playing was amazing with a striking combination of seemingly mutually exclusive properties: brightness and discreetness, rhythmic perfection and barely perceptible agogic freedom. Both vocal concerts were certainly doomed for success … The Austrian soprano Anna Prohasca, together with pianist Eric Schneider, presented the program of her solo album “Behind the Lines”, which became the main vocal protagonist for the festival idea. Proteic Prohasca, like a mythical goddess, capable of reincarnation, masterfully sang-recited in a semi-song manner about the war from the Renaissance to the twentieth century.”

“Its long since the nights in west Norway have been as light as they were in June; It is dark when, after midnight in the Rosendal Riddersalen, the Dover String Quartet let their bows drop and Fabio Di Càsola settles the clarinet. And yet nobody is really tired: The intimacy of the strings, the sugary, very present sound of Di Càsola are balm for the ears for those present at this year’s mostly uproarious festival at Rosendal … The final concert was concluded by Kirill Gerstein and Bertrand Chamayou with Maurice Ravel’s La Valse for two pianos. The increasingly terrible distorted dance degenerates into a conflict between the two musicians who throw themselves into the music, Chamayou with brains, Gerstein with power. At the end of the piano war, there are no victims, but listeners in ecstasy.

“They exist – special places with their own special atmospheres. Stories and impressions which you treasure and take back home with you. Rosendal and its chamber music festival is just such a treasure … Rosendal is a special place because Leif Ove Andsnes, together with his engaged international team, has succeeded in creating fine programmes with fantastic music and musicians which, like the roses in the garden of the manor house, bloom. Completely exciting, intensive and very infectious.”

“The Rosendal Chamber Music Festival once again presented a showcase for some of the best of classical chamber music, both fascinating and spectacularly presented in the magnificent west country scenery. Besides the brilliant music making, I will especially emphasize the successful program at this year’s festival. The way in which works, thought, and diversity beats sparks in Andsnes’ hands, the whole unconstrained breath spread out through days surprisingly free of compromises …”

“A program of more than 100 pages provides a detailed introduction to the works and background of the performers. Running alongside the chamber music festival there is always an art exhibition. This year the exhibition had the same theme, with a screen exhibition in the Riddersalen with pictures of Otto Dix (1891-1969) and Per Krohg (1889-1965), both of whom painted during World War One, and an exceptionally good exhibition at the manor house (from 1665) featuring 22 paintings from Håkon Bleken’s later works, including those that were made after the impression of the Utøya disaster. Bleken has been active as an artist for almost 70 years now! Also for the exhibition there was an elaborate 125-page program, written by Gunnar Danbolt, who also has curated exhibitions. They run until September 2nd.”

“All the works on the opening concert were composed in the years between 1914 and 1917. Akiko Suwanai on violin and Ingrid Andsnes’ piano gave a well-defined interpretation of Bartok’s Romanian folk dance (1915) before the fabulous French pianist Bertrant Chamayou crashed with Ravels Le Tombeau de Couperin ( 1914-17), in a rare, delicate and brilliant feast … The late evening concert in the little Gothic stone church Kvinnherad church (1250) with Matthias Goerne and Andsnes in Schubert’s Winterreise became a shocking experience. This alone was worth a trip to Rosendal for! In all the 30 good recordings I own of this most inspired of all song cycles, I have never heard a more dramatic interpretation.”

“Each concert had a kind of intangible inner red line … and a kind of overarching context went from program to program … In this festival of highlights, and because so much of the music was new to the public, it was the intensity of listening that was unusual. The audience’s concentration was at times so strong that we did not always realise when a piece had ended: we didn’t want it to be over. Then came the standing ovation as an explosively, almost abrasive reaction.”

“Brilliant was how Andsnes was able to bring together all the different expressions without anything being one-sided. A number of concert introductions, lectures and speeches also helped erase the seams. Among them was Astrid Kvalbein and Erling Sandmo, and John Pellowe – project manager for the Constellation Systems by Meyer Sounds in California – the digital-acoustic system that has transformed Baroniet’s old barn into a startling good Concert Hall. Of the 120 halls of which Pellowe is responsible for around the world, four are in Norway, and more are on the way, but hardly any of them can boast such scenic surroundings.”

“The really great experience on Friday morning was Alexander Zemlinsky’s String Quartet No. 2 (op.15) from the years 1914-17. A 40-minute, almost unbearably exciting line, where short themes are varied into endless long arches, music that is struggling to find new ways out of the traditional tone language – here presented with the colossal expression of the young, amazing Dover String Quartet.”

“It is a long time since I’ve looked forward to a festival as much as the Rosendal Chamber Music Festival. Enticed by the old-fashioned model. At Festivals nowadays ideas are often conceptualized and “conveyed” so strongly that you forget the core, in this case, classical chamber music … Something else I looked forward to with the festival was to become familiar with new musicians. How many harpists can you name? Sivan Magen has been a soloist with orchestras on a similar level as legendary pianists, so he could well be called a harpist superstar. As a soloist he gave us a high romantic meditation by Gabriel Fauré, where he showed that the harp can have orchestral qualities. In other words, he got us to think about the romantic-musical time of the instruments intended, and had no technical challenges which stood in the way of conveying the music’s complex textures. Afterwards we heard Ravel’s Introduction and Allegro for String-Quartet, harp, flute and clarinet. In addition to that it is written for a relatively large Chamber Ensemble and it is rare to have a harpist that is good enough to play this.”

“Andsnes has a unique ability to put together focused and varied programs. Often between light and heavier pieces, known, less known and unknown. At the Rosendal festival there are so many performers who already have stellar status or are about to reach that point and that is due to his wide network of contacts. But it is also due to willing and generous sponsors, the Kristian Gerhard Jebsen Foundation, Trond Mohn and a number of others.”